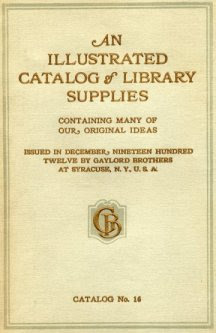 Whenever I have the chance I acquire early catalogs of library supply companies. Among the catalogs in my collection are several from Gaylord Brothers, a library supply and furniture company that was established in 1896 and continues today. My earliest catalog for Gaylord Brothers is its 1912 catalog. A specialty for Gaylord from its beginning was the repair of books. Its catalogs are filled with products that assisted libraries in the in-house repair of worn and damaged books. In Gaylord's 1912 catalog it offered a comprehensive Book Binding Kit which it argued allowed a library to repair books for one to four cents. The cost of the kit was only $9.75. In its 1926 catalog Gaylord referred to its book repair system as "The Toronto Method of Book Repairing". Gaylord published a 1924 pamphlet on this method which is digitized in the Hathi Trust Digital Library. In Gaylord's 1933 catalog they offered a "Bookcraft Box" (see below) which could be ordered with everything a library needed for its book repair operation or empty to be stocked by the library. One of my early library jobs included the repair of books for a large public library and I used many of the products offered by Gaylord. Do any libraries still repair their own books? Gaylord is known for a number of innovative products including its well known charging machine. 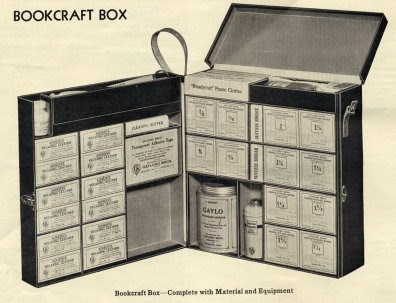 Just the other day, in a conversation, I was wondering what had happened to in-house library mending. I remember, especially from 1953 to 1959, when I worked at the Enoch Pratt Free Library in Baltimore, that one of several menders would visit the branches where I worked and, on a set schedule, spend a day or part of it, mending books that we had set aside. I always thought it would be a fun job -- and would not be hard on ones feet, as children's librarianship (my specialty) was. On the other hand, it was probably lonely but perhaps a good job for people (always women, in my experience) who wanted to serve people without dealing with them -- and there are people who like that combination!
Now, as a user primarily of the Chicago Public Library, I note that someone writes in a book, "Missing pages 153-159," or some such, and the user is warned that stuff is not there, but no effort appears to be made to mend what is there. I do glue text blocks back in place if needed, glue in loose signatures, etc., but I have a feeling that no one appreciates that. On the other hand, I also think people appear to be easier on books than they were when I was a young librarian in the 1950s and later.

I recently commented to a younger colleague about something being the color of a Gaylord box. She just looked at me without an ounce of comprehension. I added, trying to provide a clue, "you know, the ORANGE color." No, she hadn't a clue. "What's a gaylord?" she asked. I changed the subject.

Does anyone else remember the vivid orange boxes in which all things from Gaylord were stored?