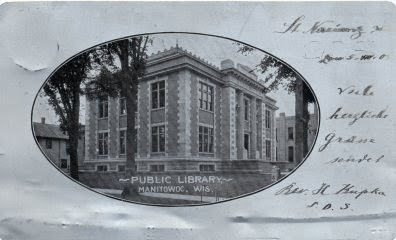 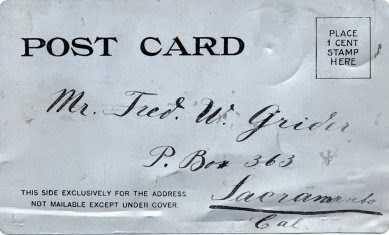 To my collection of unusual library postcards I have added an aluminum postcard that depicts the former Carnegie building of the Manitowoc (WI) Public Library. Manitowoc received a $25,000 Carnegie grant in 1902 and the new Carnegie building opened in 1904. It housed the public library until it was replaced in 1967, and unfortunately was razed after that. A brief history of the Manitowoc Public Library is located HERE. The postcard was mailed on Dec. 5, 1905 from Manitowoc to Sacramento, CA. In the first decade of the 20th century when postcards were in their heyday there were some pretty unusual postcards that made their way through the postal system. I've previously written about leather postcards and wooden postcards. There is an interesting aspect to this aluminum postcard. It doesn't have a stamp or a postmark cancellation. That is because when it was mailed it was enclosed in a clear outer envelope on which the stamp was placed and cancelled. There is a statement on the address side of the postcard which reads: "Not Mailable Except Under Cover". All of these unusual postcards were probably a huge headache for the mail clerks that had to deal with them.
Posted by Larry T. Nix at 9:47 AM No comments: 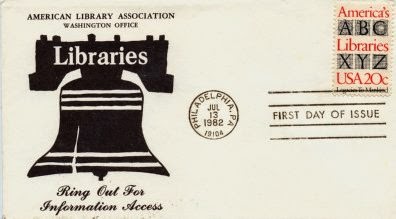 For Women’s History Month I’m writing about a group of women who collectively made an enormous contribution to the improvement of library service in America. These were the women who served as director of the Washington Office of the American Library Association from 1950 through 1999. They were the lobbyists for America’s libraries, and they carried out this role exceptionally well. The ALA Washington Office was established in October of 1945 and celebrates its 70th anniversary this year. Paul Howard became the first director of the office when it opened in 1946 but left in 1949 when ALA closed the office due to lack of funding. It reopened in 1950 under the leadership of Marjorie Malmberg, the first of the women featured in this article. Malmberg had relocated to Virginia with her husband after she had led a successful effort to get state funding for libraries in Wisconsin. Malmberg is credited by her successors for laying the foundation for a politically effective Washington Office and for playing an important role in the effort to secure federal legislation for libraries. Malmberg was followed as director by Alice Dunlap who served a short term (Sept, 1951-Jan 31, 1952), but continued efforts toward federal legislation. Julia Bennett Armistead headed the Washington Office from 1952 through 1957 and helped to finally secure the passage of the Federal Library Services Act (LSA) in 1956. It fell to Germaine Krettek (1907-1994) who became director of the Washington Office in November 1957 to secure the actual funding for rural library service which was authorized under LSA.  President Eisenhower recommended initial funding for LSA of only $3 million, but Krettek led efforts that resulted in an appropriation of $6 million. Also under Krettek leadership, LSA was expanded in 1964 to become the Library Services and Construction Act (LSCA) and included support for urban as well as rural libraries. When Krettek retired in 1972 federal funding for libraries under all federal legislation had increased to $200 million. For her legislative efforts Krettek was honored by ALA with the Joseph W. Lippincott medal in 1969 and was elected to Honorary Membership in ALA (ALA’s highest honor) in 1973. Eileen Cooke who had worked under Krettek in the Washington Office starting in 1964 became director in 1972. Cooke was presented with a major challenge when for fiscal year 1974 President Nixon recommended zero funding for ESEA II, LSCA, and HEA II. Librarians responded to calls from the Washington Office for action and their efforts led to $151.2 million in funding for library programs. Throughout her tenure Cooke fought for the reauthorization and funding for federal legislation that benefited millions of American. Carol Henderson, Cooke’s assistant and successor, called her boss, “the legendary library lady of Capitol Hill”. When ALA celebrated the 50th anniversary of the Washington Office in 1996, Cooke was given Honorary Mermbership in ALA for her distinguished career. Cooke retired in 1993 and was succeeded by Henderson who served until 1999. Under Henderson the Washington Office established the Office of Technology Policy and successfully worked for the passage of the Telecommunications Act of 1996. Emily Sheketoff became director of the Washington Office in 1999 and is the current director. Sheketoff has continued to build successfully on the efforts of her predecessors. The entire library community can be thankful that these enormously talented women were drawn to serve in a leadership role in the Washington Office of the American Library Association.