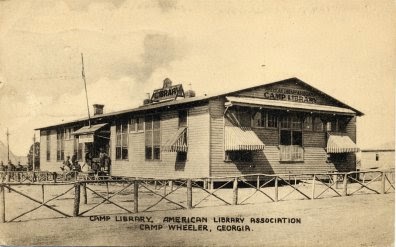 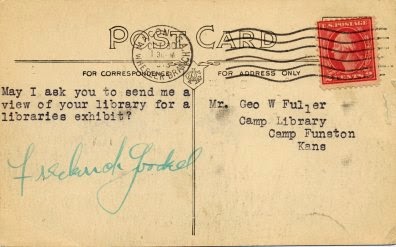 Through the generosity of a fellow collector (thanks Al) I recently acquired a group of 5 postcards which were mailed from ALA Library War Service camp librarians in WWI to the camp library in Camp Funston, KS. All of the postcards were published by the American Library Association and all depicted the camp library of the librarian mailing the card. The cards were from Camp Wheeler, GA; Camp Sevier, SC; Camp Lewis, WA; Camp Dodge, IA; and Camp Greene, NC. The librarian at Camp Funston was George W. Fuller. Three of the cards request a postcard in exchange from Camp Funston. Two just extend "Greetings". The card from Camp Wheeler (shown above) is signed by Frederick Goodell, and says, "May I ask you to send me a view of your library for a libraries exhibit?". ALA published postcards of the exterior of almost all of its camp libraries in the United States, and some postcards of the interiors of camp libraries. I have a collection that includes many of the camp library postcards. These 5 are especially nice since they are used and have a direct connection to the libraries. I have a couple of other postcards in my collection that request an exchange of postcards so I think this was a fairly common thing for camp librarians to do. Most camp librarians took a temporary leave from their regular library job to serve in this capacity. Almost all were ALA members and most continued their career as librarians after serving as a camp librarian. More information about the ALA Library War Service and its postcards can be found HERE.
Posted by Larry T. Nix at 2:31 PM No comments:

Harry Clemons, Representative of the ALA War Service in Siberia 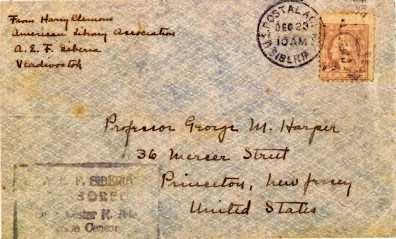 On Nov. 6, 1918 Harry Clemons, Professor and Librarian at Nanking University in Nanking, China received the following cable from R.L. Raney, Director of Overseas Library Service for the ALA Library War Service in Washington, DC:
"Will you accept appointment official representative American Library Association Vladivostok to develop library service for American forces in Russia? Books being shipped steadily. Will meet all expenses and guarantee against salary loss. Cable Libcon, Washington." Clemons responded the next day with, "Will attempt library service when you direct. University desires my return by May." Thus began what must be one of the most amazing efforts by a single individual on behalf of the American Library Association. I have written previously about the work of Harry Clemons in Siberia, but recently I became aware of an envelope (shown above) mailed by Clemons shortly after his arrival in Vladivostok. This prompted me to do another post. One of the specialties in philately is the collection and study of military postal history. Examples of envelopes mailed by men in the American forces in Siberia during World War I are among the scarcest and most sought after by collectors. The envelope above may be the only envelope mailed by Clemons as ALA's representative in existence in private hands. It is part of the collection of Al Kugel, one of the world's most respected military postal historians. I appreciate his letting me use the image of the envelope in this post. Clemons mailed many letters to the American Library Association while in Siberia and they were compiled in a book titled appropriately The A.L.A. in Siberia. A copy of the book can be found on the Hathi Trust site. In the foreword to the book H. B. Van Hoesen who edited the book noted that Clemon's report on his work to the Commanding General "shows the activity as well as the activities of the A.L.A. Library War Service in Siberia; how in five months, one man was able to handle some ten thousand volumes (plus 10 boxes, 194 parcels, 75 mail sacks, not counting discarded magazines), unpacking censoring, sorting, cataloguing, and repacking; to distribute and organize these into a system of over fifty branches scattered all the way from the Yangtse Valley to no one knows how far towards the German frontier (not to mention gift distribution); and at the same time to act as reference department and superintendent of no inconsiderable circulation; and, on top of all this, to produce, in slow longhand manuscript, and in spite of obstacles like frozen ink, etc., a series of reports of real historical value among the chief literary "by-products" of the Library War Service." The compilation of Clemons letters was distributed to all the attendees of the 1919 ALA Conference in Asbury Park, NJ. After his service in Siberia Clemons returned to Nanking University where he worked until 1927. He then became Librarian of the University of Virginia Library in Charlottesville,VA where he worked until his retirement in 1950. Clemons is included in the Dictionary of American Library Biography (Libraries Unlimited, 1978).
Posted by Larry T. Nix at 8:10 PM No comments: 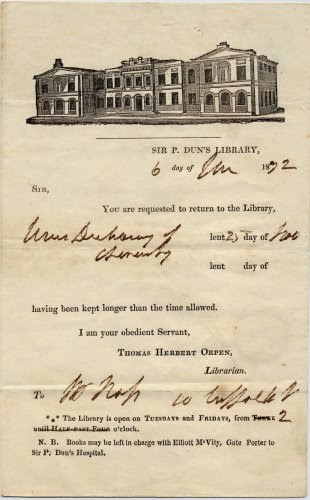 While collecting postal librariana I have managed to acquire many examples of one of the most common forms of library communication - the overdue library materials notice. I've written previously about my large collection of overdue notices on postal cards. I've also written about the oldest overdue notice in my collection. Recently I acquired a much older overdue notice. It is shown above and it was mailed on Jan. 7, 1832 by Sir P. Dun's Library in Dublin, Ireland. The Librarian was Thomas Herbert Orpen and he courteously ends the overdue message with " I am your obedient Servant". The library was part of Sir Patrick Dun's Hospital whose building is shown at the top of the overdue notice. Sir Patrick Dun (1642-1712) was a prominent Irish physician who left an endowment in his will that resulted in the establishment the hospital in 1800. The hospital ceased operation in 1986. Dun also built an extensive personal medical library that is now part of the Royal College of Physicians Library in London which also houses the archives for the hospital.