Andrew Carnegie funded library buildings at fifteen Historically Black Colleges and Universities (HBCU). I have previous posts about the library at Tuskegee Institute in Alabama and the library at Fisk University. The other libraries are located at: Alabama A&M in Normal, AL; Atlanta University in Atlanta, GA; Benedict College in Columbia, SC; Johnson C. Smith Univ. in Charlotte, NC (formerly Biddle Univ.); Cheyney State University in PA; Florida A&M in Tallahassee, FL; Fort Valley Normal and Industrial Institute Fort Valley, GA; Howard University in DC; Knoxville College in Knoxville, TN;  Livingstone College in NC; Talladega College in AL, Wilberforce University in Wilberforce, Ohio; and Wiley College in TX. Postcards for the libraries are difficult, if not impossible, to find. Below are postcards showing Carnegie HBCU libraries in my collection.

Library is building on the left.
Posted by Larry T. Nix at 12:36 PM No comments: 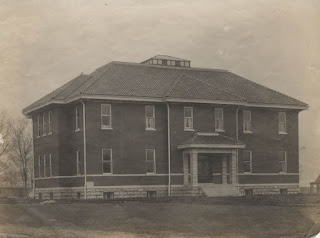 Fisk University is a Historically Black College and University (HBCU) located in Nashville, TN which was established in 1866. The University was the recipient of a grant for $20,000 from Andrew Carnegie for a library building in 1905. The library opened in 1909. It was designed by black architect Moses McKissack III, and it was one of the first major structures designed by a black architect in the U.S. An image of the library is shown above. The building currently serves as the Fisk University Academic Building. The image is from an online article by John Baldwin titled "Fisk University Academic Building (formerly Carnegie Library)" which is part of Clio: Your Guide to History for May 18, 2018. An interesting aspect of the Fisk University Carnegie library building was that it was made available to Nashville's "colored citizens" under the same rules as it served Fisk students. I learned this information from an excellent historical overview of Fisk University libraries by Jessica Carney Smith in Tennessee Libraries. At the time Smith wrote the article she was the Librarian for Fisk. 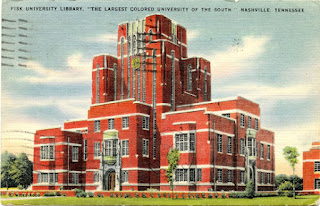 By the late 1920s the Carnegie building was inadequate and a $400,000 grant from the General Education Board made a new library building possible. That building which is shown on the postcard above was completed in the fall of 1930. It was designed by architect Henry C. Hibbs. Then University Librarian Louis S. Shores played a major role in its planning. The building was designed to also serve nearby Meharry Medical College. Provision was also made to include a "Carnegie branch library" for Nashville's black residents. A significant feature of the interior of the building was murals painted by Harlem Renaissance artist Aaron Douglas.
According to Jessica Carnie Smith's article Arna Bontemps, a Harlem Renaissance writer, became Fisk's first black head librarian in 1943. Bontemps added professional staff and built up special collections at the library. He left Fisk in 1965 and was replaced by Jessica Carney Smith. The need for an even larger library facility resulted in a new 74,000 square foot building that opened in January 1970. it was named the John Hope and Aurelia E. Franklin Library in 2000.
I attended George Peabody College (now part of Vanderbilt University) in Nashville from 1961 to 1965. From 1963 to 1965 I worked part time at the Public Library of Nashville and Davidson County. During that period Arna Bontemps served on the Board of Trustees of the public library. For part of the time his son was also a part-time employee of the public library. In 1965 I applied to the University of Illinois Library School and part of the application process involved an interview with an alumni of the school. Jessica Carney Smith was working at what is now Tennessee State University in Nashville when I applied to the U of I. She had just received her doctorate from the University of Illinois Library School, the first African American to do so, and she conducted my interview. Soon after that Smith became the Librarian at Fisk University.
Posted by Larry T. Nix at 11:38 AM No comments: 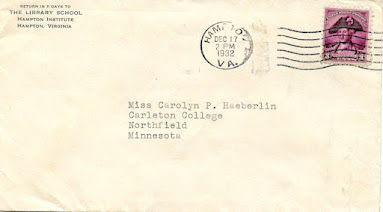 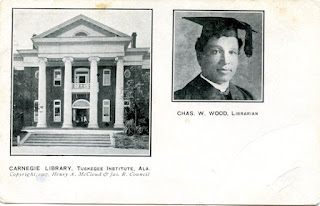 The un-mailed undivided back postcard above has several different stories to tell. It includes a picture of Charles Winter Wood (1869-1953) who is identified as the Librarian for the Carnegie Library of the Tuskegee Institute in Alabama. There is little information, however, about Wood's role as a librarian on the Internet. There is an article about Wood's connection with Beloit College in Wisconsin, something that caught me by surprise. Booker T. Washington hired Wood as head of Tuskegee Institute's English and Drama Departments in 1897, a capacity in which he served for over 30 years. In 1900 the Tuskegee Institute received the first of 15 grants made by Andrew Carnegie for  library buildings for  Historically Black Colleges & Universities (HBCUs). The Carnegie Library building is shown on the postcard above. Wood assumed the additional role of Librarian for the Tuskegee Institute in 1904. It is not clear how long he maintained this dual responsibility but the postcard was copyrighted in 1907. Outside of his academic responsibilities at the Tuskegee Institute, Wood is most noted for his acting career which was significant. The Charles Winter Wood Theater at Florida A&M University is named for him. Shaundra Walker has written an interesting article about Andrew Carnegie's library grants to HBCUs. There is also an interesting project at the University of Southern Mississippi about Carnegies grants for public library buildings that served African Americans. 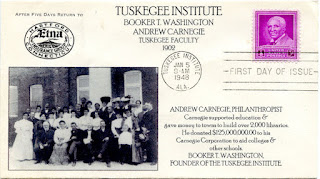 First day cover for the 1948 Booker T. Washington stamp. Includes a picture of the Tuskegee Institute faculty in front of the Carnegie Library.
Posted by Larry T. Nix at 8:00 AM No comments: