The St. Louis Mercantile Library celebrated its 125th anniversary in 2021. According to its website: “Founded in 1846 and chartered by the State of Missouri in that year, the St. Louis Mercantile Library is the oldest general library in continuous existence West of the Mississippi River.”  The library is now located on the campus of the University of Missouri – St. Louis. Mercantile libraries are one of the major types of membership libraries. They were started by businessmen in behalf of young merchants’ clerks embarking on their careers. They began in Boston and New York in 1820 but were eventually established in most major cities in America including St. Louis. I have a philatelic exhibit featuring America’s membership libraries and mercantile libraries constitute a major component of the exhibit. I have a number of artifacts in the exhibit relating to the St. Louis Mercantile Library, some of which are shown below.  I have a previous blog post which discusses the bookplates of the Mercantile Library.  I also have a blog post about my visit to the library in 2015. 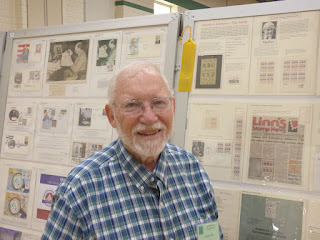 The year 2021 was a good year if you were a collector or exhibitor of library philately which I am. The year 2020 was a bust for philatelic exhibiting but it provided an opportunity to revise and expand existing exhibits which I did.

I have been collecting postal items related to libraries since 1995 and exhibiting those items since 2003. One of the first library postal artifacts that I began collecting was first day covers featuring the 1982 “America’s Libraries” stamp. The American Philatelic Society establishes the rules for philatelic exhibiting which allow several different types of exhibits. One of those types is for illustrated mail including first day coves. My first exhibit of first day covers and other artifacts related to the “America’s Libraries” stamp took place several years ago. Philatelic exhibits are housed in special exhibit frames that hold 16 letter size sheets, and my first exhibit was housed in 4 frames.  In 2021 I completely remounted the exhibit and expanded it to 6 frames. I was able to show the new exhibit at the Minnesota Stamp Expo in Minneapolis in July 2021, the Great American Stamp Show (GASS) in Chicago in August 2021, and the WISCOPEX stamp show in New Berlin, WI in October 2021. Exhibits at stamp shows are judged individually against prescribed criteria by a panel of judges certified by the American Philatelic Society. Exhibits receive an award level based on how well the exhibit does against those criteria. Award levels are: large gold, gold, large vermeil, vermeil, large silver, silver, silver bronze, bronze, and certificate.  At Minnesota, the exhibit received a gold award, at GASS a large vermeil award, and at WISCOPEX the Best of Show award.

Another type of philatelic exhibit is called “display”, and this type allows the inclusion of non-philatelic artifacts in the exhibit. Most of my exhibits fall into this type. In 2021 I exhibited a two frame exhibit titled “Melvil Dewey – American Library Pioneer and Social Reformer” for the first time.  I had initially developed the exhibit for the Rockford, Illinois stamp show which is limited to 2, 3, and 4 frame exhibits. That show was cancelled in 2020. This exhibit was shown at the Minnesota Stamp Expo and GASS. At Minnesota it received a large vermeil award and at GASS it received a vermeil award.

I have included postal artifacts related to membership libraries in the United States in many of my display type exhibits over the years. In 2015 I developed a 5 frame exhibit exclusively about the different types of membership libraries. I later expanded the exhibit to 6 frames.  In 2021 I completely revised the exhibit and expanded it to 8 frames under the title “America’s Membership Libraries 1731-1910”.  I showed the revised exhibit for the first time at the Omaha Stamp Show in September and again at the Chicagopex Stamp Show in November. At Omaha the exhibit received a large gold award and at Chicagopex a gold award.

The United States authorized the use of government issued postal cards in 1873. These were pre-stamped and cost only 1 cent. Libraries immediately began using these cards for a number of library activities such as overdue notices, reserve notices, and gift acknowledgements.  Melvil Dewey advocated for a postal card the same size as a library catalog card, and in 1898 the United States Post Office issued a “library size” postal card.  I have collected examples of the use of this card by libraries for many years, and I developed a one frame exhibit which I titled appropriately “Library Uses of Melvil Dewey’s Postal Card”. I have shown the exhibit at several shows in the past and at the invitation of the United Postal Stationery Society I showed it again in 2021 at the Philatelic Show in Boxborough, MA in September. The exhibit received a gold award.

The links below lead to other blog posts about by library philatelic exhibits.