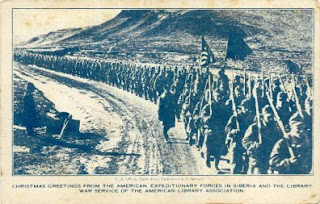 The caption on this postcard sends Christmas Greetings from the AEF and the ALA Library War Service in Siberia.

Ninety years ago, in December of 1918, Harry Clemons found himself in Vladivostok, Siberia as the sole representative of the American Library Association Library War Service. His role was to provide library service to the members of the American Expeditionary Force (AEF) in Siberia. As described in one report of the circumstances on his arrival: "That there were unusual opportunities for library service was apparent. The troops were comfortably housed in winter quarters; the thrill of the war was over and the men wanted to get home." Clemons wrote to ALA War Service Headquarters on December 22,1918, shortly after his arrival: "I hope to be able to send sets [of books] to all the detachments, large and small, of the Expedition during Christmas week. Thus we introduce the short story into the long Siberian night. In my position of 'middleman' I am sure I can send to you and the others who are making the war work possible the grateful Christmas greetings of the Expeditionary Force in Siberia." A compilation of Clemons' letters back to the ALA headquarters were distributed to participants of the 1919 ALA Conference in Asbury Park, New Jersey. A full report of ALA's Library War Service was made at this conference. Presentations on the Library War Service at Asbury Park can be found on pages 152 to 273 of the Bulletin of the American Library Association for 1919 which is in Google Books. This compilation includes a report from Clemons on pages 222-223.
Posted by Larry T. Nix at 7:54 AM