Leary's Book Store and The Bookworm 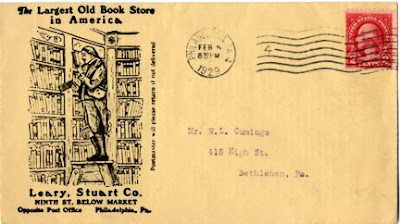 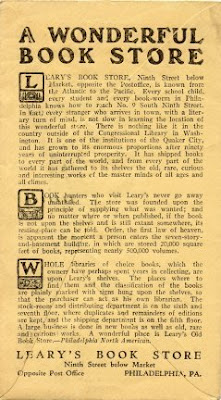 In the previous post on the Gale Research Company I mentioned a story in the book by John Tibbel about how Fred Ruffner, the owner of Gale, obtained the sign in front of Leary's Book Store in Philadelphia when it went out of business in 1968. I discovered that I had a cover in my collection of postal librariana that showed the illustration that appears on the sign. The illustration is based on the painting entitled "The Bookworm" by Carl Spitzweg that is now at the Milwaukee Public Library. The cover which was mailed in 1929 has a wonderful promotional message on the back. Some excerpts:


"There is nothing like it in the country outside of the Congressional Library in Washington."


"Order, the first law of heaven, is apparent the moment a person enters the seven-story-and-basement building, in which are stored 20,000 square feet of books, representing nearly 500,000 volumes."

The story told by Tebbel involved the difficulty of getting the sign into Gale's headquarters in Detroit after it had been shipped to Philadelphia. The sign was so large that it wouldn't fit into the freight elevator or even on top of the elevator. It took a crew of eight men with great difficulty to get it up seven flights of stairs.
Posted by Larry T. Nix at 8:49 AM