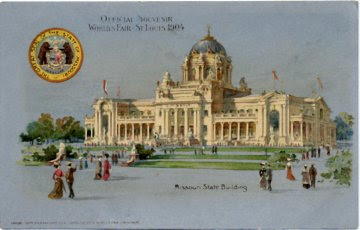 
American Libraries, the magazine of the American Library Association, did an excellent job of celebrating its centennial in 2007. It created the CentenniAL Blog as part of its celebration which included many interesting postings. An article in the blog entitled "Meet Me In St. Louis" by George Eberhart is especially worth reading. It is about the American Library Association Conference that took place in St. Louis in 1904 at the St. Louis World's Fair. As noted by Eberhart, the American Library Association sponsored an exhibit at the fair which included a model library that served as a branch of the St. Louis Public Library. Due to the efforts of St. Louis Public Library Director Frederick Crunden space for the exhibit was provided in the Missouri State Building. Both the exhibit and Crunden received awards from the fair. In an unfortunate set of circumstances the Missouri State Building was destroyed by fire less than two week before the end of the fair. Fortunately, most of the books and the furniture in the model library were saved.
American Libraries has also created an online timeline of its first 100 years which has lots of neat cover illustrations.
Posted by Larry T. Nix at 8:10 AM