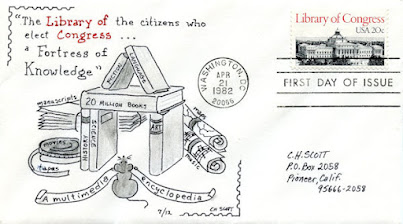 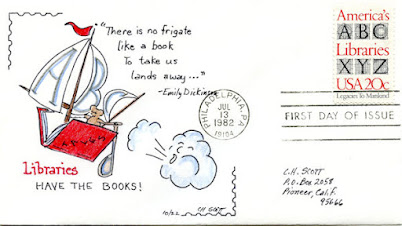 In July I attended the Minnesota Stamp Expo. A highlight of the show was the philatelic exhibits which included a number of exhibits of first day covers. One of the first day cover exhibits was titled "How Now Brown Mouse? - The Evolution of Anon E. Mouse Cachets". The exhibit was the work of Cynthia Scott the creator of Anon E. Mouse Cachets. I collect and exhibit first day covers for library stamps and I was delighted to find a first day cover for one of those stamps in Cynthia's exhibit. It was the first day cover for the 1982 Library of Congress stamp which is shown above. I own a copy of that cover as well as Cynthia's cover for the 1982 America's Libraries stamp, also shown above. Cynthia has an amazing website which in addition to serving as a vehicle for marketing her covers also explains how she produces the covers. For the two covers above, she drew the cachet (illustration) designs using pen and pencil on a small sheet of paper which she inserted into multiple envelopes one at a time. Using a light box she then traced the original design on the envelopes. She then hand colored the designs on the envelopes. All of Cynthia's first day covers include an image of a small mouse. Cynthia received a gold medal for her exhibit in Minnesota. She has a copy of the exhibit on her website. I have a first day cover exhibit for the America's Libraries stamp which includes Cynthia's cover for that stamp.

The American First Day Cover Society (AFDCS) has lots of excellent information for anyone interested in learning more about first day covers.