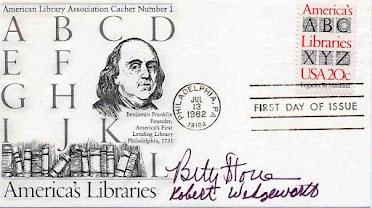 Forty years ago on July 13, 1982 the United States Postal Service (USPS) issued a postage stamp honoring  America's libraries. It was the result of years of lobbying by the library profession for such a stamp. A first day of issue ceremony for the stamp was held in Philadelphia at the annual conference of the American Library Association (ALA). Originally the stamp was supposed to also honor the Library of Congress, but Librarian of Congress Daniel Borstin persuaded the USPS to issue a separate stamp for the Library of Congress. That stamp was issued on April 21, 1982. I previously wrote a post about that stamp. Both stamps were designed by Bradbury Thompson, one of the world's great graphic designers and typographers. ALA, led by its President Betty Stone, went all out to promote the America's Libraries stamp. This included producing a first day cover (FDC) for the stamp (shown above) which was sold in various configurations. The one above is signed by Stone and ALA Executive Director Robert Wedgeworth. The cover included an insert with information about ALA. ALA contracted with ArtCraft, the major publisher of FDCs, to design and print its FDC. Over a hundred other FDC producers (called cachet makers) also designed an FDC for the America's Libraries stamp. I collect the different FDCs for the America's Libraries stamp and I have developed an exhibit of those covers which I have shown at national level stamp shows. Among the most sought after FDCs by collectors are those that are hand drawn and painted. The one below was created by arguably the most famous cachet maker Dorothy Knapp.  I wrote an article titled "Bradbury Thompson's 1982 Library Stamps" for the July issue of PHILATELI-GRAPHICS, the publication of the Graphics Philately Association of the American Topical Association. 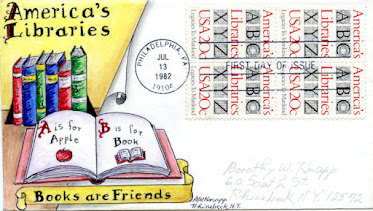