Libraries and Trolleys on Postcards

In the golden age of picture postcards both libraries and trolleys (streetcars) were common subjects of the cards. Postcards which feature both libraries and trolleys, however, are uncommon. I find those postcards especially interesting and appealing. Public libraries in large cities are more likely to be featured on postcards which also include one or more trolleys.  The Boston Public Library is featured on more postcards that include a trolley by far than any other library. Not far behind is the New York Public Library. Below are some of the postcards in this category from my personal collection of library postcards.

The first card features the Boston Public Library. It is interesting because of the message on the address side of the card. It reads "Public Library. Note small street car. I have seen the cars of New York, Boston, Phila., Chicago, Norfolk, Jamestown, Mil. but none half as good and big as Mpls. [Minneapolis]." The postcard was posted on Nov. 8, 1909 on the U.S.S Missouri. 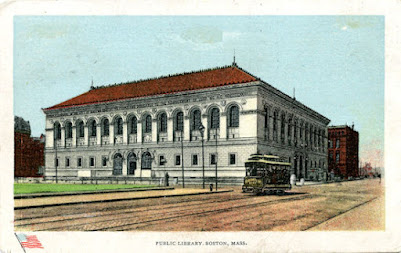 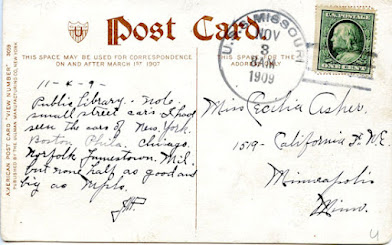