The significance of the nondescript postal card below rests with its connection to one of the most important people in the history of the Hawaii State Library – Edna Isabel Allyn (1861-1927).  When this card was sent to Allyn by her former staff at the Brooklyn Sub Branch of the Cleveland Public Library, she had just become librarian of the Honolulu Library and Reading Room Association.  Allyn would transition this library into a free public library and then the Hawaii State Library. She would become Hawaii’s first State Librarian.  The card is a pre-printed overdue book notice that has been adapted in a humorous way – “Please return yourself at once and avoid accruing our displeasure.”  The postal card is dated June 14, 1907 and addressed to “The Truant”. It has no postage or postmark and was probably enclosed in another envelope for delivery to Honolulu. 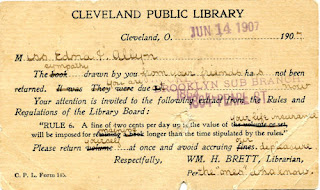 The Honolulu Library & Reading Room Association was established in 1879 when Hawaii was still a country with a king and its own postal system. H. A. Parmelee was one of the founders of the library. This postal card was mailed locally in Honolulu on Oct. 31, 1892. 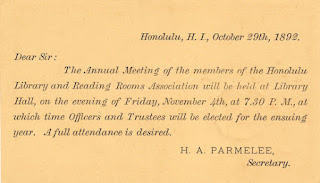 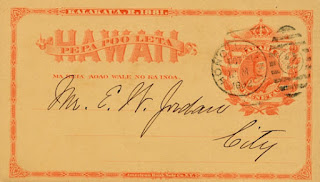 Postcard shows the library in Honolulu directed by Edna Allyn.  Message on the back reads in part: “The building on the left is the library.  We hope for a better one some day.” Mailed from Honolulu, Hawaii to the Public Library in Newark, NJ, March 16, 1908. 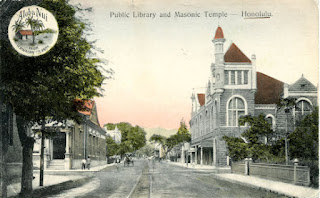 In 1909 the Hawaii Library and Reading Room Association transfered its assets to the newly formed Library of Hawaii which received a $100,000 grant from Andrew Carnegie for a building. That building opened (shown below) to the public on February 1, 1913. Edna Allyn was appointed the first librarian, a post she held until her death in 1927. The children's section of the library is named in her honor.  Postcard mailed on March 5, 1931. 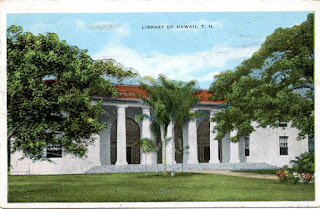 After statehood in 1959 the Library of Hawaii became the Hawaii State Library.
Posted by Larry T. Nix at 9:04 AM