Unusual Postcard of the Fairhope (AL) Public Library Circa 1909 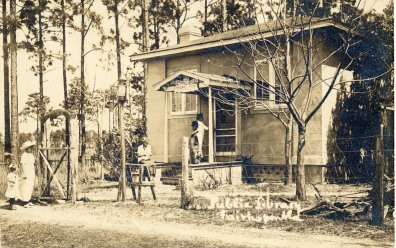 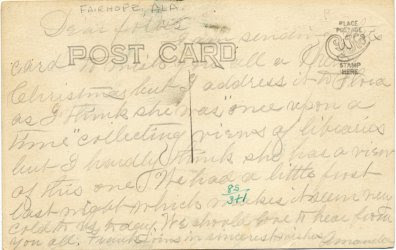 The Fairhope Public Library in Fairhope, AL has an interesting history which I learned about after acquiring the unusual postcard shown above. Fairhope was created as a Single Tax Colony in 1894. When Marie Howland joined the Colony in 1899 she established a library in her home. That library was later moved to the building shown on the postcard above. The postcard is a Real Photo Postcard (RPPC) depicting the Fairhope Public Library circa 1909. The postcard was evidently enclosed in a Christmas card. The message on the back of the card reads in part: " I am sending this card to wish you all a Merry Christmas but I address it to Flora as I think she was 'once upon a time' collecting visions of libraries but I hardly think she has a vision of this one." As I have indicated previously on this blog I value postcards with messages and I am especially interested in messages that point to a fellow collector of postcards.  With the assistance of Norman D. Stevens I have created lists of past and current collectors of library postcards.
Posted by Larry T. Nix at 9:56 AM

Fairhope is a beautiful city/town on Mobile Bay. I notice that the patrons are African-Americans, but they are getting to use a library in 1909!. Southern Alabama has a history of being less segregated than the rest of the state. Do you know if this is the case here? Is this a 'colored' library? I doubt they were integrated by that date.

Tony,
When I first looked at the postcard, I also thought the library might be a library for African-Americans. However, on close examination there is only one person pictured on the postcard who is definitely African-American (the male walking down the steps). The library's website has the same postcard and it is identified as the first library for Fairhope. Because the people who were part of the Single Tax Colony were from the North it is possible that African-Americans could use the library, but I can't say for sure that this was the case. Larry

I am a historian in Fairhope and can assure you the African Americans in the picture were not patrons of the library. Fairhope historically had a very low percentage of blacks and they were not in the mainstream of activity in the town. Nice to think they might have been, but they were not.

This is really neat! Where was the first library located?

Fairhope is in L.A. (Lower Alabama.) It is on Mobile Bay, and is fairly close to the city of Mobile. It is a beautiful town.