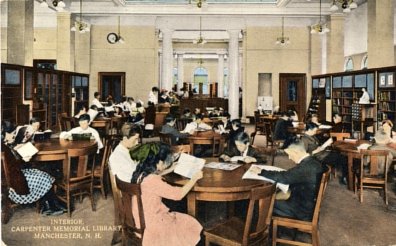 We take separate children's rooms in public libraries for granted today, but that was not the case before the 1890s. It was in that decade that the transition from no separate children's rooms in public libraries to almost every public library having a separate children's room began. I was prompted to investigate the start of this practice in public libraries when a friend passed along a link to an article in Pittsburgh.magazine.com about the formation of the Children's Department at the Carnegie Library of Pittsburgh. The article by Rick Sebak ends by saying: "So we may not have the first, but we may have had the first really good one, carefully managed and “organized” by a caring staff of well-trained librarians. We taught the rest of the world what makes a quality children’s department."  Sebak makes note in his article of the role played by Frances Jenkins Olcott who came to the Carnegie Library of Pittsburgh in 1898 in developing the Children's Deaprtment. Although various libraries including the Boston Public Library lay claim to having the first public library children's room, the Brookline Public Library in Massachusetts seems to have the strongest claim. Their children's room was established in June of 1890 primarily to get noisy children out of the adult reading room. It was initially supervised by the library's janitor. Of the large public libraries, the Denver Public Library under the leadership of John Cotton Dana was the first to establish children's services in 1894. Dana reporting on the success of the children's department at Denver in 1896 said this: "If public libraries are of value, this form of a children's department must be, if not the ideal thing, certainly an ideal thing." Mary Wright Plummer, Director of the Pratt Institute Free Library in Brooklyn and an advocate for children's services in public libraries, conducted a survey in 1896 and found that the majority of public libraries did not allow membership by children under 12. She identified only 15 public libraries that provided services from a children's room. Under Plummer, a new library building for the Pratt Institute was the first to include a children's room in its initial design and was actually constructed.  My source for this information is the book American Library Development 1600-1899 by Elizabeth W. Stone (H. W. Wilson, 1977).  There was another recent online article about the first children's library in Quebec, Canada. The postcard above shows children using the Carpenter Memorial Library in Manchester, New Hampshire.
Posted by Larry T. Nix at 11:29 AM

There was another very early children's room (1888) in the New York Free Circulating Library (NYFCL) although it did not become permanent. According to HM Lydenberg's History of the New York Public Library (1923) Melvil Dewey wrote the NYFCL on behalf of the Children's Library Association in January 1888 asking that a children's room be provided on the third floor in the newly-opened George Bruce Branch. The NYFCL agreed, and the CLA provided the books and the librarian. The experiment apparently didn't extend beyond December 1888. NYPL absorbed the NYFCL in 1901 to create NYPL's Circulation Department and NYPL's children's work officially began in 1906 under Anne Carroll Moore.

The West Chester Public Library, PA (1872) listed "boys, girls, and youths" among its borrowers as early as 1881. The 1888 building, which we still occupy though it is expanded and renovated, had "an alcove ... filled with juvenile books" by 1897. The need for a separate children's room was formally addressed in 1911 with the appointment of a children's librarian. By 1915 the library had it's Children's Room. (www.wcpubliclibrary.org)