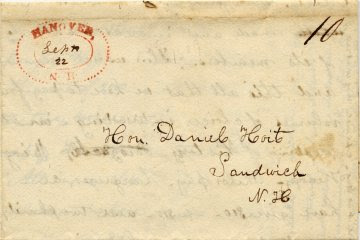 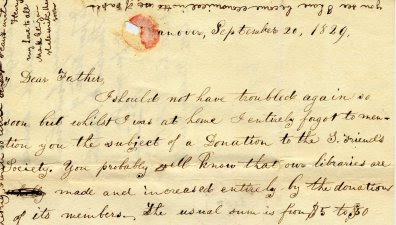 In one of those unusual coincidences I wrote about the Society of Social Friends, a student literary society at Dartmouth College, on Saturday and on Sunday at a local stamp show I obtained an amazing 1829 letter from a student member of the Society. I am able to obtain some of the more interesting items in my postal librariana collection because a few stamp dealers (thanks Terry) keep their eye out for items for "the library cover guy". This item was a stampless letter (postage stamps didn't come into being in the United States until 1847) mailed by Dartmouth student Henry Hoit to his father Daniel in Sandwich, NH. The letter is almost totally about the need for Henry to make a donation for the library of the Social Friends and the case for why his father should advance him the funds to do so. Henry writes in part, "You probably well know that our libraries are made and increased entirely by the donation of its members. The usual sum is from $5 to $50 and this is all that we have to pay for the use of 8000 volumes of choice, interesting, instructive books consisting of History, Biography, Travels, Theology, Philosophy, Languages, etc." Henry goes on to say that all in his class have given $10 except a few have given $15 and two "charity scholars" have given $5 and $7 respectively. There is a notation on the letter by Daniel Hoit that indicates that Henry was successful and that funds had been sent. Daniel Hoit or "General" Hoit as he was addressed because of his rank in the state militia was a prominent person in New Hampshire and had served a number of terms in the State Legislature. He ran for Governor on two occasions. William Henry Hoyt (he later changed his name from Hoit to the original family name of Hoyt) graduated from Dartmouth in 1831 and then went to Andover Theological Seminary. He was ordained first as an Episcopal minister but later converted to the Catholic faith and became a priest. Henry's brother Albert graduated from Dartmouth in 1829 and became a prominent artist. Henry mentions Albert in his letter.