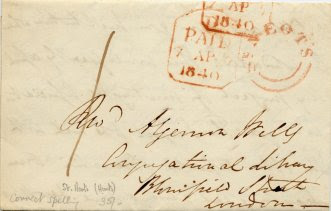 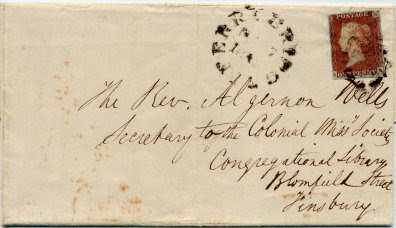 Although I collect postal librariana related to libraries throughout the world, most of my posts on the Library History Buff Blog pertain to libraries in the United States. Today (April 26) the Library and Information History Group (LIHG) of the Chartered Institute of Library and Information Professionals (CILIP), the United Kingdom's equivalent of the American Library Association, held a one day conference on parochial libraries. So I thought I would do a post about a group of folded letters mailed to the Congregational Library in London in the 19th century. All of the letters are mailed to Reverend Algernon Wells in his capacity as Secretary to the Colonial Missionary Society. The Colonial Missionary Society evidently had its offices at the Congregational Library, but had no other direct connection to the library. The earliest of the letters was mailed in 1838 and the latest in 1844. All of the letters have postal markings, but only the 1842 letter has a postage stamp (shown above). You may know that it was Great Britain that issued the first postage stamp (commonly called the Penny Black) in 1840. The 1840 letter shown above was mailed just a month before the Penny Black became valid for postage on May 7. At the time the letters were mailed the Congregational Library was located on Blomfield Street in Finsbury, a location it occupied from 1831 to 1866. The use of the terminology "parochial library" is more common in the United Kingdom where one of the earliest pieces of legislation was the Parochial Libraries Act of 1708.