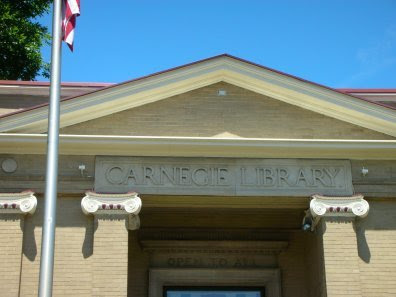 Finley Peter Dunne (1867-1936), a Chicago newspaper writer and editor, created a fictional homespun philosopher with a strong Irish brogue who expounded on issues of the day in the early twentieth century. Dunne wrote hundreds of the Mr. Dooley sketches which were syndicated in newspapers nationally and published in several books. One of those sketches dealt with Andrew Carnegie's library philanthropy. It appeared in the book Dissertations by Mr. Dooley (1906). A reprint of the "The Carnegie Libraries" sketch was included in the Spring, 1976 issue of the Wisconsin Magazine of History. Here is how it starts out:

"Has Andrew Carnaygie given ye a libry yet?" asked Mr. Dooley.
"Not that I know iv," said Mr. Hennessy.
"He will," said Mr. Dooley. "Ye'll not escape him. Befure he dies he hopes to crowd a libry on ivry man, woman, an' child in th' country. He's given thim to cities, towns, villages, an' whistlin' stations. They're tearin' down gas-houses an' poor-houses to put up libries. Befure another year, ivry house in Pittsburg that ain't a blast-furnace will be a Carnaygie libry. In some places all th' buildin's is libries. If ye write him f'r an autygraft he sinds ye a library."

And later:
"Does he give th' books that go with it?" aksed Mr. Hennessy.
"Books?" said Mr. Dooley. "What ar're ye talkin' about? D'ye know what a libry is? I suppose ye think it's a place where a man can go, haul down wan iv his fav'rite authors fr'm th' shelf, an' take a nap in it. That's not a Carnaygie libry. A Carnaygie libry is a large, brown-stone, impenethrible buildin' with the' name iv th' maker blown on the' dure. Libry, fr'm th' Greek wurruds, libus, a book, an' ary, sildom, -sildom a book. A Carnaygie libry is archytechoor, not lithrachoor."

And still later in the sketch:
" All th' same, I like Andrew Carnaygie. Him an' me ar're agreed on that point. I like him because he ain't shamed to give publicly. Ye don't find him puttin' on false whiskers an' turnin' up his coat-collar whin he goes out to be benivolent. No, sir. Ivry time he dhrops a dollar it makes a noise like a wather fallin' down-stairs with a tray iv dishes."
Note: In reality, it was not a requirement for a Carnegie library grant that Carnegie's name be included on the building.
Posted by Larry T. Nix at 6:59 AM