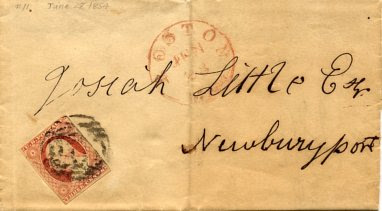 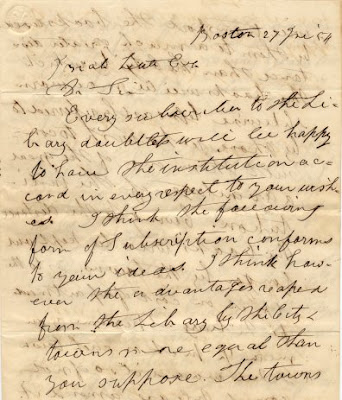 The library cover story for October on The Library History Buff website involves a letter and envelope relating to the formation of the Newburyport Public Library in Massachusetts. Josiah Little founded the library in 1854. This cover was mailed to him from Boston by Samuel Swett on June 27, 1854. The cover is an example of a folded letter where the letter is folded in such a way that it also serves as an envelope. In the letter, Swett, an author who was born in Newburyport, provides Little with advice on the formation of the library. Little's original intent was evidently to form a subscription library, but Swett points out the advantages of establishing a public library supported by the City of Newburyport and the adjacent towns. Massachusetts passed a a general law providing for the establishment of free public libraries in 1851. Newburyport was one of the first ten public libraries established under the new law. The library was opened to the public in 1855, one year after the Boston Public Library opened to the public. A history of the library can be found here.
Posted by Larry T. Nix at 9:26 AM

The original library building (a handsome, former private home) still stands, but a modern addition was added. This dwarfs the original early 19th century structure and is butted up right against it. Hardly an attractive arrangement. Better to have built a glassed in enclosure between the two. The walkway connecting the main door of the old building to the street was removed and replaced with a lawn, which is enclosed with a fence. Now the original building sports a handsome entryway that isn't used or linked to anything. I don't mind good modern architecture, but the original library visually suffered by all of this.