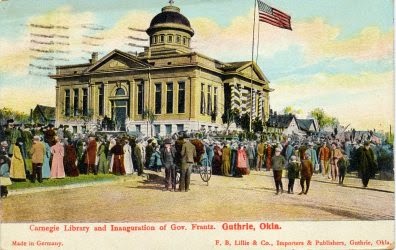 When Andrew Carnegie gave a grant of $26,000 to Guthrie, Oklahoma on October 17, 1901 for a public library building it was the capital of the Oklahoma Territory. The library building was completed in 1902 and in 1906 it served as the backdrop for the inauguration of Frank Frantz, Oklahoma's last territorial governor. That event is depicted on the postcard above. Guthrie lost out to Oklahoma City as the permanent State Capital. The Carnegie building ceased to house the public library in 1972 when a new public library building was completed. According to the website of the Oklahoma Territorial Museum, the Carnegie building barely escaped destruction due to the generosity of a benefactor who also donated a museum building to the City. The very elaborate building which was added to the National Register of Historical Places in 1971 is now part of the museum complex. Information about Oklahoma's other Carnegie libraries can be found HERE.
Posted by Larry T. Nix at 11:51 AM