1956, A Big Year for Public Libraries 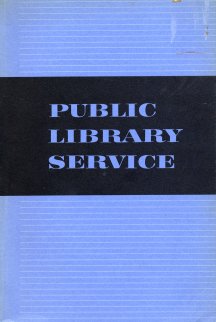 As 2011 comes to a close, I wanted to mention a couple of events that occurred in 1956 that had a major impact on the development of public library service in the United States. The first was the publication of Public Library Service: A Guide to Evaluation With Minimum Standards (American Library Association, 1956). This was a landmark publication which basically made the case for larger units of public library service. As stated in the document: "Libraries working together, sharing their services and materials, can meet the full needs of their users. This co-operative approach on the part of libraries is the most important single recommendation of this document. Without joint action, most American libraries probably will never be ale to come up to the standard necessary to meet the needs of their constituencies." In the same year that this blueprint for better public library service was published, the first major federal aid program for public library service, the Library Services Act, was passed by the United States Congress and signed into law. The primary focus of the Library Services Act was to extend and improve library service to rural populations. Statewide plans for accomplishing this were required to receive the federal aid. A number of states including Wisconsin developed state plans that called for the creation of federated public library systems. In Wisconsin, demonstrations of county and regional library service using federal LSA funding led to the eventual passage of of the 1971 (40 years ago) Library Systems Law that has resulted in every citizen of Wisconsin having access to public library service. I have worked in two other states, Tennessee and South Carolina, where statewide public library service was also achieved primarily with the use of LSA and later LSCA funding. Today, the federal Library Services and Technology Act (LSTA) under the direction of the Institute for Museum and Library Services (IMLS) continues the legacy of LSA started 55 years ago.
Posted by Larry T. Nix at 8:19 AM

1956 was indeed a banner year for public libraries in the U.S. In my dissertation, "Carma Russell (Zimmerman) Leigh: An Historical Look at a Woman of Vision and Influence" (UCLA, 2000), I discuss how Carma Zimmerman, state librarian of both Washington and California, was among the many library leaders who lobbied, after WWII, for federal public library funds. Once LSA was passed, Carma used these funds to develop several cooperative library ventures throughout California. And by the way, the 1956 ALA standards were based, in large part, on standards adopted in California in 1953, not too long after Carma became CA state librarian. Not surprising, she and--if I remember correctly--future husband Robert D. Leigh were also on the ALA committee that developed the national standards. This is one of my favorite periods in US library history--very exciting stuff!