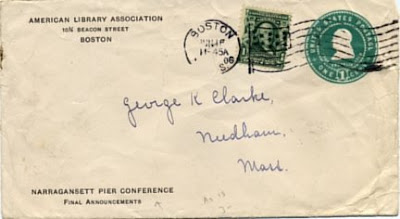 The envelope above contained the final announcement for ALA's 1906 Narragansett Pier Conference. It was at this conference that Charles Fletcher Lummis (1859-1928) founded The Bibliosmiles. Today is the 150 anniversary of the birth of Lummis. Although Lummis was only Director of the Los Angeles Public Library for five years (1905-1910) and that was his only library job, he was undoubtedly one of the most unusual members in the history of the American Library Association. Writing in the Dictionary of American Library Biography, Dudley Gordon had this to say about Lummis: "In addition to being 'the most creative librarian in California history,' Charles F. Lummis was poet, athlete, author, editor, columnist, publisher, recorder of folksongs, archaeologist, ethnologist, photographer, Casanova, pioneer conservationist, philanthropist, and founder of the Southwest Museum of Art, Science and History. And, without benefit of library training school, he made library history."


Gordon also writes about the founding by Lummis of The Bibliosmiles, a tongue in cheek organization that was a "Rally of Librarians Who Are Nevertheless Human". The Bibliosmiles came into being at the 1906 ALA conference and convened during four later conferences. According to Gordon, The Bibliosmiles had all the paraphernalia of a well-organized society. "The password was 'Cheer up, ALA,' the official dew was California apricot brandy, the seal was an open book with the legend 'Homo Sum - and then Sum.' At their annual dinner, they joyously sang 'My Dewey, 'Tis of Thee, Sweet Ex- of Albany,' 'On the Road to Carnegie, Where the Six Best Smellers Be,' and other songs provided by Lummis. The motto for the Bibliosmiles was 'To Keep the Bookdust Off Our Own Topshelves'. "

Lawrence Clark Powell said of Lummis, "There is no memorial to him in the library he led, and yet the record shows that in those few years he proved to be the most creative librarian Californai has ever know." Mark Thompson has written an award winning biography of Lummis - American Character: The Curious Life of Charles Fletcher Lummis (Arcade, 2001). More on the publications by and about Lummis can be found at WorldCat Identities. More on the life of Lummis can be found here and here.

Many years later, a snow storm stranded group of ALA members at the Palmer House in Chicago created an organization which they called The ALA Players. Lummis would have approved. Happy 150th birthday Charles.
Posted by Larry T. Nix at 8:11 AM

I highly doubt that Lummis WAS Casanova, unless he possibly portrayed him at a costume party.

Great bit of library history! Who said we were historically humorless?

Thank you for a great little gem of humor and lightness! I now have a new hero!