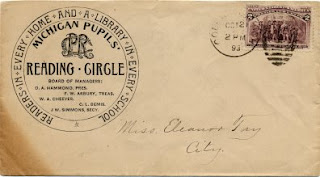 Envelope mailed in 1893 promoting
"Readers in Every Home and a Library in Every School".

I was recently made aware of a post to the American Association of School Libraries listserv concerning a newspaper article in a 1915 Tennessee newspaper about "Library Day". The article concerned the declaration of October 1, 1915 by Sate Superintendent Sherrill as "Library Day". According to the article "On that day every public school in the State is expected to raise funds to establish or supplement the school library." I had never heard of "Library Day" so I went to one of my favorite Internet resources Google Books and did a search using "Library Day". The reseults were enlightening. The concept of a library day dates back at least to the 1890s and was part of a movement to put a library in every public school.

In the September, 1910 issue of American Education, pages 118-119 there is a brief history of library day in Nebraska. The Nebraska State Teachers'Association passed a resolution establishing library day on December 29, 1892. The purpose of the day was "to enlist the active cooperation of school authorities and the school children in building up and enlarging of local school libraries."

It is always good to be reminded of our library heritage and that the idea of promoting libraries is not new. In a previous blog post, I discussed the fact that although the current National Library Week started in 1958, the idea of a library week dates back at least to 1916 and that an ALA publicity committee recommended a national library week in 1922.

I have proposed another library day, "Library Heritage Day".

Library Heritage Day is a great idea! We librarians and our libraries do have a great heritage which we all too often take for granted. I like it!